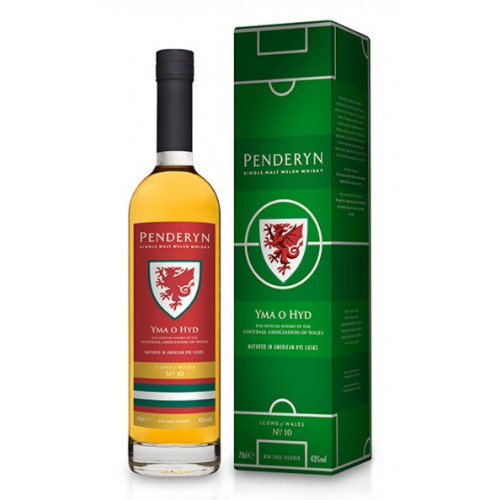 The 10th in Penderyn's Icons of Wales Edition whiskies is called Yma o Hyd. This is the patriotic anthem adopted by the Red Wall (Welsh football supproters) and is produced in partnership with FA Wales as their official Whisky for the Wales campaign at the World Cup in 2022.

This 70cl bottle has an ABV of 43% and is matured in Americal rye casks.

1958 was the last time Wales played in the World Cup and one of the greatest footballers of all, Pele, scored the Brazil goal that knocked Wales out in the quarter-finals. A long sixty-four years have passed since then, and despite near misses in 1978, 1986 and 1994, Wales have successfully qualified for the FIFA World Cup 2022. The Red Wall of football fans passionately cheered the team through the qualifiers, bonding under the slogan - #TogetherStronger - and adopting YMA O HYD as their patriotic anthem, with it's poetry and its epic chorus. The song was then adopted as a motivating anthem by the Wales players.

The song was written in 1981 by legendary folk singer, Dafydd Iwan. It reflects on the darkness that engulfed Wales after being a 'whole nation' under Roman Emperor MAcsen Wledig in 383AD. However, despite the melancholy, the metaphorical storms, the faint of heart and politicianas, Wales will be here until the end of time and the Welsh language will live on.

You must be signed in to leave a review.